In this tutorial we will be exploiting a SMB vulnerability using the Eternalblue exploit which is one of the exploits that was recently leaked by a group called the Shadow Brokers. Eternalblue exploits a remote code execution vulnerability in SMBv1 and NBT over TCP ports 445 and 139. At the time of writing it targets a wide range of Windows operating systems, from Windows XP up to Windows Server 2012. The currently available exploits do not target Windows 10 and Windows Server 2016 but most likely will in the near future when they are being modified.

Eternalblue is just one of the Windows exploits that was leaked to the public on Friday 14 April by the Shadow Brokers. The eternal ‘series’ cover a lot more exploits such as Eternalromance, Eternalchampion and Eternalsynergy all targeting recent Windows operating systems. To configure and execute the exploits against vulnerable targets there is an exploit framework included called Fuzzbunch. Fuzzbunch is developed in Python 2.6 and has many similarities with the Metasploit framework. In the following steps we will be installing the prerequisites, setup Fuzzbunch and learn how to execture Eternalblue against vulnerable targets. The result will be a reverse shell on a Windows 7 machine using Empire & Meterpreter.

Since the Eternalblue exploits have been leaked the SMBv1 vulnerability has been used in a large number of ransomware attacks such as: WannaCry, Petya and NotPetya. The NotPetya malware was later classified as a file-scrambling wiper pretending to be ransomware by demanding a ransom of 300 USD in Bitcoin. Truth is that once the file scrambling process has completed there is no way to reverse this process. NotPetya was built to destroy, not to extort victims. To maximize the damage NotPetya not only destroys the files on the victim host but also has worm capabilities to spread over the network and internet. The malware seeks to gain administrator access by using tools and techniques that have been used by pentesters for a long time. Some of these tools are a modified version of Mimikatz, PsExec and WMIC. Unlike some versions of WannaCry, the NotPetya malware doesn’t have a kill switch. One way to prevent the file scrambling process before infection is to create the following read-only file: C:Windowsperfc.dat. This file will mitigate the file scrambling part of the malware but will not prevent it from spreading over the network.

Setting up Fuzzbunch and installing prerequisites

For testing purposes we will be using a private lab setup containing the following machines:

Before we can start exploiting our target host in the lab network we need to install some prerequisites on our Windows 7 attack machine and the Kali Linux Machine.

Installing prerequisites on the Windows 7 machine

On the Windows 7 attack machine we need to install Python 2.6 and PyWin32 v212. The installation files can be downloaded here:

On the Kali Linux machine we need to install the Empire framework which is available from Github:

Installing the Empire Framework on Kali Linux is very simple, just run the ./setup/install.sh script which will install some dependencies and then run ./empire to start Empire. The next step is to download the Shadow Brokers dump and unpack it to the Desktop. When you’ve downloaded the dump from Github you have to create a new folder named ‘listeningspost’ in the windows directory that contains the fb.py (Fuzzbunch) file. Now we can launch Fuzzbunch by executing the fb.py file from the command line and it should run without any errors:

If you receive errors about missing DLL’s or imports, make sure that PyWin32 is correctly installed and the post-install script finished successfully.

Now that we have everything installed and Fuzzbunch running it requires a target and call-back IP address. The target address is the IP of the vulnerable target host which will be 10.11.1.252 (Vulnerable Windows 7 Machine) in our lab situation. The call-back IP will be the IP address of the Windows 7 attack host.

Setting the targets in Fuzzbunch.

Then we need to specify some parameters related to redirection & logging and create a new project in Fuzzbunch. We will not be using redirection so type ‘no’ and press enter to continue. Keep the logging location default by pressing enter. Then create a new project by choosing option 4 (or 0 when there are no existing projects) and name it whatever you like. Then choose to use the default logging location for your new project.

To get an overview of the loaded plugin’s/exploit type the ‘use’ command. This will display all available plugins that Fuzzbunch loaded during startup, including Eternalblue. To select the Eternalblue plugin type the following command: 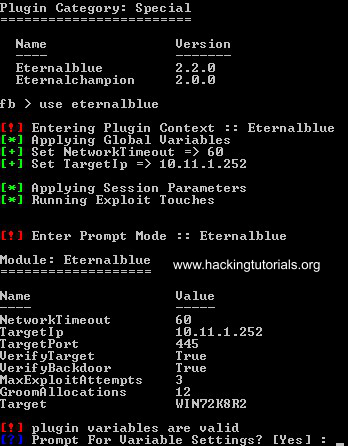 Setting the delivery mechanism to Fuzzbunch.

Finally it will ask us if we want to execute the plugin: The plugin will now execute and if everything went successfully Fuzzbunch will output that Eternalblue succeeded: The next step is to setup a listener in Empire and generate the malicious DLL file containing the reverse shell. First we will create a listener using the following commands on the Empire command line:

Finally you can use the list command to print the active listeners to the terminal:

Now that we have our listener setup to intercept the reverse shell all that is remaining now is to create the malicious DLL and inject it in the vulnerable Windows 7 host. Use the following commands to generate the DLL file with Empire:

The DLL file is now stored in the web root directory. To transfer the DLL to the Windows 7 attack box just start the Apache webserver with the following command:

Now we can download the DLL file from the Windows 7 attack machine with a web browser. Let’s store the launcher.dll file in the windows folder.

You can also generate the malicious DLL with msfvenom and setup a listener using the multi handler:

This command will successfully generate a Meterpreter payload with msfvenom:

The next step is to run DoublePulsar and inject the malicious launcher.dll file. Type the following command in Fuzzbunch to use DoublePulsar: 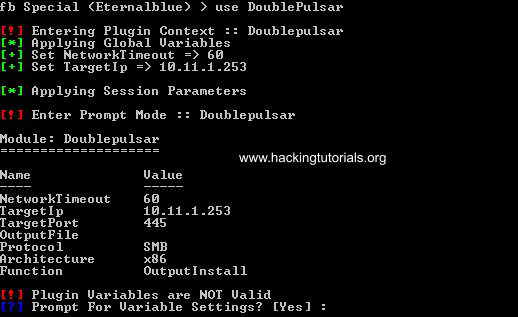 In our private practice lab we’re targeting a 64-bit vulnerable Windows 7 installation. In this case we need to change the default settings for the architecture to 64 bit and keep all other variables default until we reach the Function settings.

Instead of the default option for the Function variable we choose to inject and run a DLL. You’ve probably guessed already that we’re injecting the malicious DLL that we’ve generated with Empire earlier. Choose option 2 from the function settings:

Then we need to enter the location of the DLL file and some other options we can leave as default.

Choose the default options for all other variable settings until Fuzzbunch asks us if we want to execute DoublePulsar: If all went successful the output should like as following: 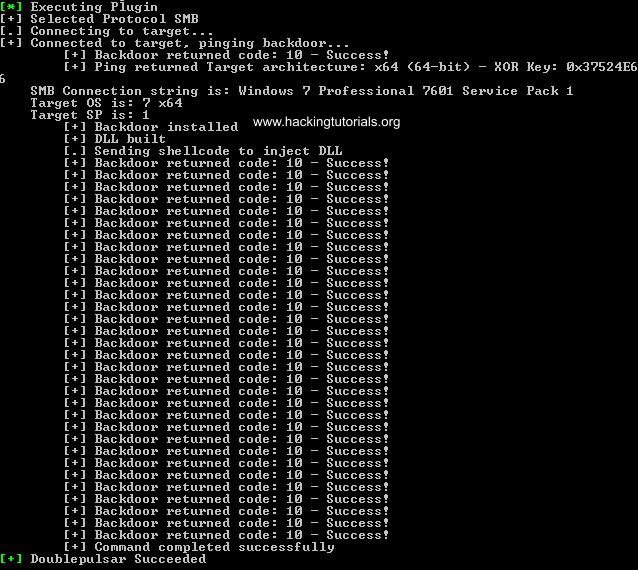 When we switch to the Kali Linux VM running the Empire listener we should have a reverse shell from the target host which we can no interact with:

Switching from Empire to Meterpreter shell in Metasploit

Let’s see if we can switch from the Empire shell to Metasploit Meterpreter. Run the following commands to setup a listener:

Now that the multi handler is running switch back to Empire and run the following commands:

When we switch back to Metasploit again we should have received a Meterpreter shell: Eternalblue has been patched by Microsoft in March 2017. If you haven’t installed the patch it is very recommended to do so on a short term. Another effective method is to disable SMBv1 on your Windows machines.

Use the following command to check if SMBv1 is disabled:

From this tutorial we’ve learned how to remotely exploit a vulnerability in SMBv1 with Eternalblue. Even though Eternalblue is a little bit harder to exploit than MS08-067 the results are the same. In this tutorial we’ve demonstrated how easy it was to exploit Windows 7 and gain a root shell. More information about Eternalblue can be found on the CVE website under CVE-2017-0143 and in Microsoft Security Bulletin MS17-010.

We hope you found this tutorial useful for educational purposes. Hopefully we created the awareness of why updating your Windows system regularly is so important and why it is not wise to use old technologies like SMBv1 nowadays. Another lesson learned here is why you should not expose SMB/RDP services to the internet. Remote exploitation of Eternalblue is possible over the internet and currently happening on a large scale with the WanaCry and NotPetya ransomware infecting thousands of machines.

In the following tutorials we will be looking at the order exploits that were leaked by the Shadow Brokers.