In this tutorial we will demonstrate how to install Metasploitable 3 in a Windows 10 environment using Vagrant, Packer and Virtualbox. So far we did a number of tutorials on hacking the Metasploitable 2 Linux machine on Hacking Tutorials. We’ve demonstrated how to install Metasploitable 2, how to enumerate it and perform a vulnerability assessment, and finally how to exploit it. As like many vulnerable machines that are for download Metasploitable 2 is a Linux machine. Because of strict licensing policies it a challenge to provide vulnerable Windows machines without breaking any licensing rules. Unfortunately you cannot just download the VM but you have to configure it yourself using a few tools and a Windows 2008 evaluation copy which is downloaded from the Microsoft website.

Before we can continue with the installation procedure we need to install a few dependencies:

In order to avoid (a lot of) trouble it is recommended to download the exact version as mentioned above. The success rate of the installation script depends greatly on the build environment. For your reference, we’re building the Metasploitable 3 machine on Windows 10 Enterprise x64 Build 15063.

Are you installing Metasploitable 3 on a VM that is running on VMware ESXi like us? Don’t forget to enable ‘Hardware virtualization’ for the VM CPU.

Before we can build the VM we have to install Vagrant and Virtualbox using the downloaded installation files. We will not demonstrate the installation procedure for this software as it’s very straightforward and only involves clicking ‘next’ a couple times. Next we need to install the Vagrant reload plugin and we need to download Packer.

Change the directory on the command line to the directory where you have downloaded and unpacked the Vagrant Reload plugin. Then run the following command to install the plugin:

Now that we have installed the Vagrant reload plugin we can continue with downloading Packer.

Now that we have all pre-requisites installed we can use Packer to setup the Virtual Machine in Virtualbox. Move the command line to the Metasploitable 3 location and run the following command from an elevated command line: 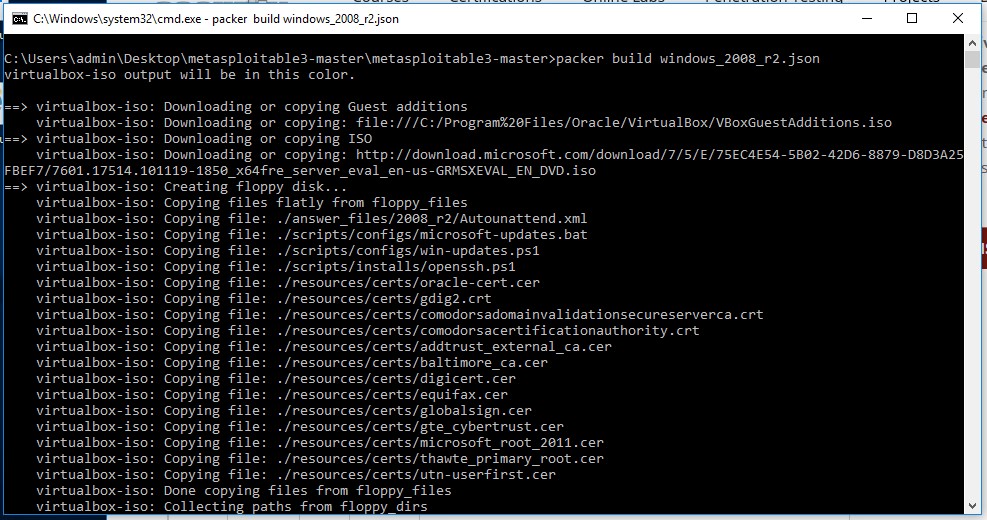 Building the Metasploitable 3 VM will take a while.

This command will take a while to complete because first it will download a Windows 2008 evaluation copy from the Microsoft website. When the download is finished, the script will continue to setup the virtual machine in Virtualbox and install Windows 2008 on the virtual machine. The entire process will take anywhere from 30-60 minutes. This depends on the configuration of your host machine and the speed of your internet connection. When the script is finished the output looks as following: 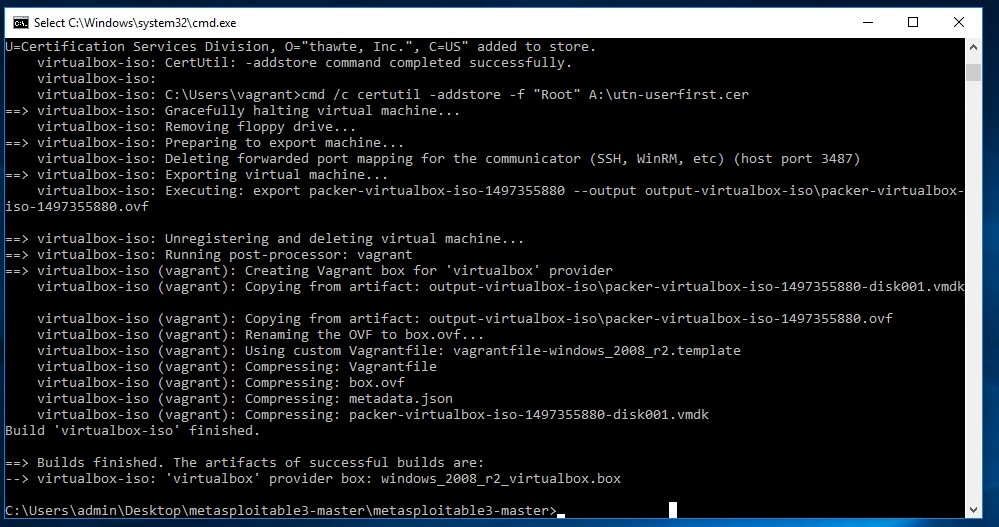 When the script is finished run the following command:

Metasploitable 3 added to the Vagrant environment.

Finally we have to run the one more command to have Vagrant execute the scripts that install the vulnerable software on the Windows server 2008 virtual machine. Run the following command and expect to wait another 15-30 minutes until completion:

This will conclude the installation of Metasploitable 3 and you should be able to start the VM within Virtualbox.

The Metasploitable 3 setup process is a bit tricky and prone to errors related to specific versions of the prerequisites. Most errors I faced while writing this tutorial were avoided by using the versions of Vagrant, Packer & Virtualbox mentioned earlier in this tutorial. Especially the latest version of Virtualbox resulted in many errors after issuing the vagrant up command.

During the installation of the vulnerable software you might get an error related to the virtual machine state: “The guest machine entered an invalid state while waiting for it to boot.”. When this happens reboot the virtual machine and run the vagrant up command again.

Another error that may occur during the installation of vulnerable software is the following: “chocolatey is not recognized as an internal or external command”. The error didn’t only apply to Chocolatey but also some other scripts. To get rid of this error I’ve added the following directory to the Path variable:

This will make all the scripts in this directory accessible without using a full path. Eventually I had to run the ‘Vagrant up’ command several times before it finished without errors. 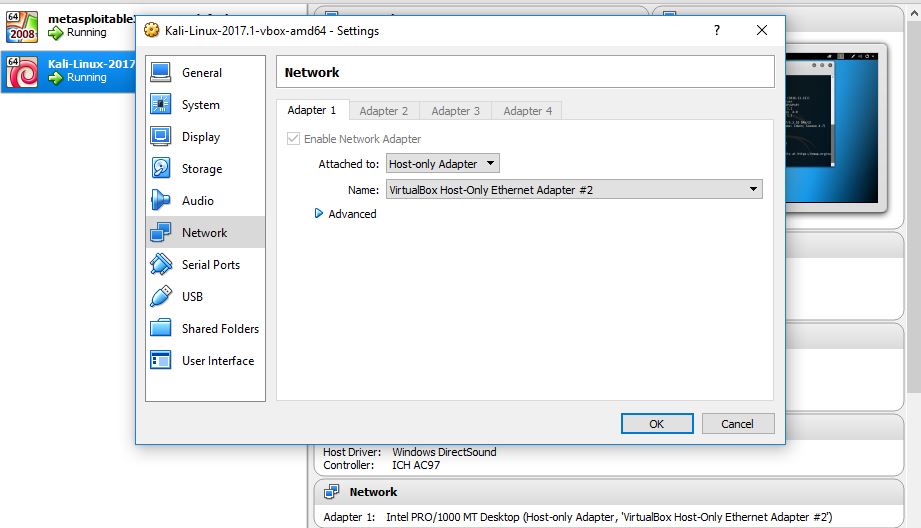 In the next tutorials we will be enumerating and exploiting Metasploitable 3 and create a full walkthrough.

Do you prefer immediate access to a full virtual penetration testing environment with 30 vulnerable machines, courseware and a Certificate for less than $99,- USD? Check out: The Virtual Hacking Labs. 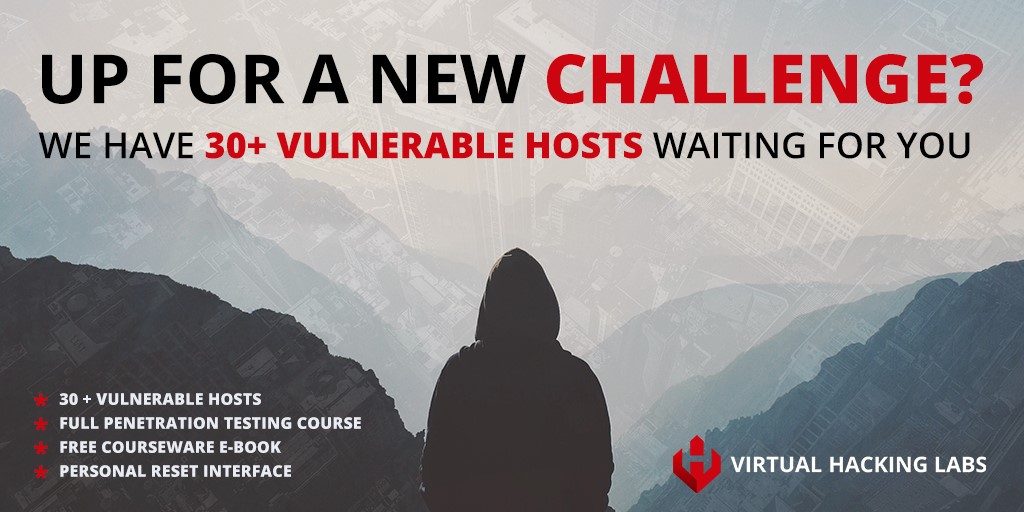