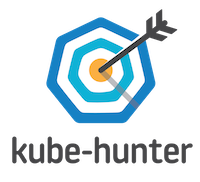 Kube-hunter hunts for security weaknesses in Kubernetes clusters. The tool was developed to increase awareness and visibility for security issues in Kubernetes environments. You should NOT run kube-hunter on a Kubernetes cluster you don't own!
Run kube-hunter: kube-hunter is available as a container (aquasec/kube-hunter), and we also offer a web site at kube-hunter.aquasec.com where you can register online to receive a token allowing you see and share the results online. You can also run the Python code yourself as described below.
Contribute: We welcome contributions, especially new hunter modules that perform additional tests. If you would like to develop your own modules please read Guidelines For Developing Your First kube-hunter Module.
Hunting

Where should I run kube-hunter?
Run kube-hunter on any machine (including your laptop), select Remote scanning and give the IP address or domain name of your Kubernetes cluster. This will give you an attackers-eye-view of your Kubernetes setup.
You can run kube-hunter directly on a machine in the cluster, and select the option to probe all the local network interfaces.
You can also run kube-hunter in a pod within the cluster. This gives an indication of how exposed your cluster would be in the event that one of your application pods is compromised (through a software vulnerability, for example).

Scanning options
By default, kube-hunter will open an interactive session, in which you will be able to select one of the following scan options. You can also specify the scan option manually from the command line. These are your options:

Deployment
There are three methods for deploying kube-hunter:

On Machine
You can run the kube-hunter python code directly on your machine.

Container
Aqua Security maintains a containerised version of kube-hunter at aquasec/kube-hunter. This container includes this source code, plus an additional (closed source) reporting plugin for uploading results into a report that can be viewed at kube-hunter.aquasec.com. Please note that running the aquasec/kube-hunter container and uploading reports data are subject to additional terms and conditions.
The Dockerfile in this repository allows you to build a containerised version without the reporting plugin.
If you run the kube-hunter container with the host network it will be able to probe all the interfaces on the host:
docker run -it --rm --network host aquasec/kube-hunter
Note for Docker for Mac/Windows: Be aware that the "host" for Docker for Mac or Windows is the VM which Docker runs containers within. Therefore specifying --network host allows kube-hunter access to the network interfaces of that VM, rather than those of your machine. By default kube-hunter runs in interactive mode. You can also specify the scanning option with the parameters described above e.g.
docker run --rm aquasec/kube-hunter --cidr 192.168.0.0/24

Pod
This option lets you discover what running a malicious container can do/discover on your cluster. This gives a perspective on what an attacker could do if they were able to compromise a pod, perhaps through a software vulnerability. This may reveal significantly more vulnerabilities.
The job.yaml file defines a Job that will run kube-hunter in a pod, using default Kubernetes pod access settings.